The origin and developmet of the field

The current form of paediatric haematology and oncology in our country was formed throughout several decades.

Originally until the end of World War II, haematopoietic disorders fell under the department of general paediatrics. The founder of modern Czech paediatric haematology as a separate study is prof. Otto Hrodek, DrSc., whom in the 1950’s together with authors Janel and Mitera published the first textbook on Haematopoietic disorders in childhood. In 1985 prof. Hrodek initiated the establishment of the Workgroup of Paediatric Haematology (PSDH) in order to centralize care in specialized centers and recommended the management of treatment of children with leukaemia, according to the German BFM protocol. The updated BFM protocols are followed at our workplace still today.

In the Czech Republic the development of the study of paediatric haematology started in the second half of the 20th century. After the end of WWII the development was in reaction to the growth of all medical fields as well as the reopening of Czech Universities. Pediatric haematology found fertile ground thanks to the foresight of the School of Paediatrics. It was represented by prof. MD. Jiří Brdlík, DrSc. and his successor at the 2nd children’s unit at Charles University of Prague prof. MD. Josef Houštěk, DrSc. as well as prof. MD. Jiří Švejcar, DrSc., Head of the 1st children’s unit at the Charles University in Prague and later the Head of the Children’s unit at the Institute for Further Education of Physicians and Pharmacists in Prague.

In the beginning, pediatric haematology took its expertise also from the cooperation with the Czech school of haematology. It’s main representatives in the post war era were prof. MD. Miloš Netoušek, author of the comprehensive monograph Science of Blood (second edition, 1951), as well as prof. MD. František Heřmanský, DrSc., excellent pioneer in cytology, cytochemistry blood cells and disturbances of haemostasis, in particular the proportion of platelet function. Among other important personalities were prof. MD. Vladimír Jedlička, DrSc., author of the fundamentaly important work about blood coagulation (monograph Hemokoagulace, 1954) and prof. MD. Ludvík Donner, DrSc., author of the detailed textbook on haematology (Klinická hematologie, 1985, Útlumy kostní dřeně, 1969).

Prof. MD. Otto Hrodek, DrSc., became chief of the hematology department at the Second clinic of pediatry. MD. Miroslav Mitera, became the head of the blood bank, chief of the pediatric unit at the County hospital in Ústí nad Labem.

Prof. MD. Otto Hrodek, DrSc. is the founder of modern Czech paediatric hematology. He did reaserch and published works on the coagulation system in newborns. He focused on the diagnosis and treatment of childhood leukaemia, aplastic anaemia and haemophilia. In 1985 he initiated the establishment of the Working Group of Pediatric Hematology (PSDH) in the Czech Republic and recommended treatment of childhood acute leukaemia, according to German protocol BFM.

PSDH was established unofficially in 1985, when prof. MD. Otto Hrodek, DrSc. Gathered a meeting of the paediatric haematologists at the Motol hospital. Colleagues from Prague, Pilsen, Hradce Králové, Ústí nad Labem, České Budějovice, Ostrava, Olomouc and Brno. The impulse for repeated meetings was the decision to launch a joint study of treatment of children with acute lymphoblastic leukemia in the Czech Republic, which was launched in 1986. In the 80's the professor Hrodek was held the position of Chairman.

The 90's brought formal agreements PSDH as a work section of the Czech Paediatric Society and Czech Haematology Society ČLS JEP by setting the statute and operating principles. A committee was established consisting of representativie of the leukaemia center. Professor MD. Jan Starý, DrSc was elected as chairman. The first Paediatric haematology conference took place in Ostrava in 1992. Soon, the conference turned into a working meeting of Czech and Slovak paediatric haematologists and held alternately in the Czech and Slovak Republics. Since 2004 the Paediatric Oncology was placed in as a regular agenda of the conference.

In the mid-1960s children in the Czechoslovakia began to devote prof. MUDr. Josef Koutecký, DrSc. In 1974, he managed to build a separate Children´s Oncology Station. Subsequently, the Department of Paediatric Oncology (1976) was formed where prof. Koutecký was primary. In Czechoslovakia, the first extensive monograph on children's tumors was published by prof. Koutecký in 1978. The first independent Clinic of Paediatric Oncology in Czechoslovakia was founded on June 1, 1983 at the Motol University Hospital, which houses the largest workplace for the treatment of childhood malignancies in the Czech Republic until today.

The Czech (resp. Czechoslovak) children´s oncology began to develop in 1964 by MUDr. Josef Koutecký at the Department of Pediatric Surgery of the Faculty of Pediatrics of Charles University in Prague and the Children´s Faculty Hospital. Motivation of MUDr. Koutecký for interest in children's patients was the absence of targeted care for children and adolescents with malignant tumors. The results of treatment in Czechoslovakia were desperate - less than 5% of children survived. 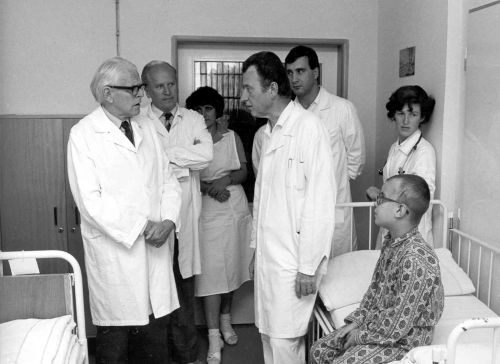